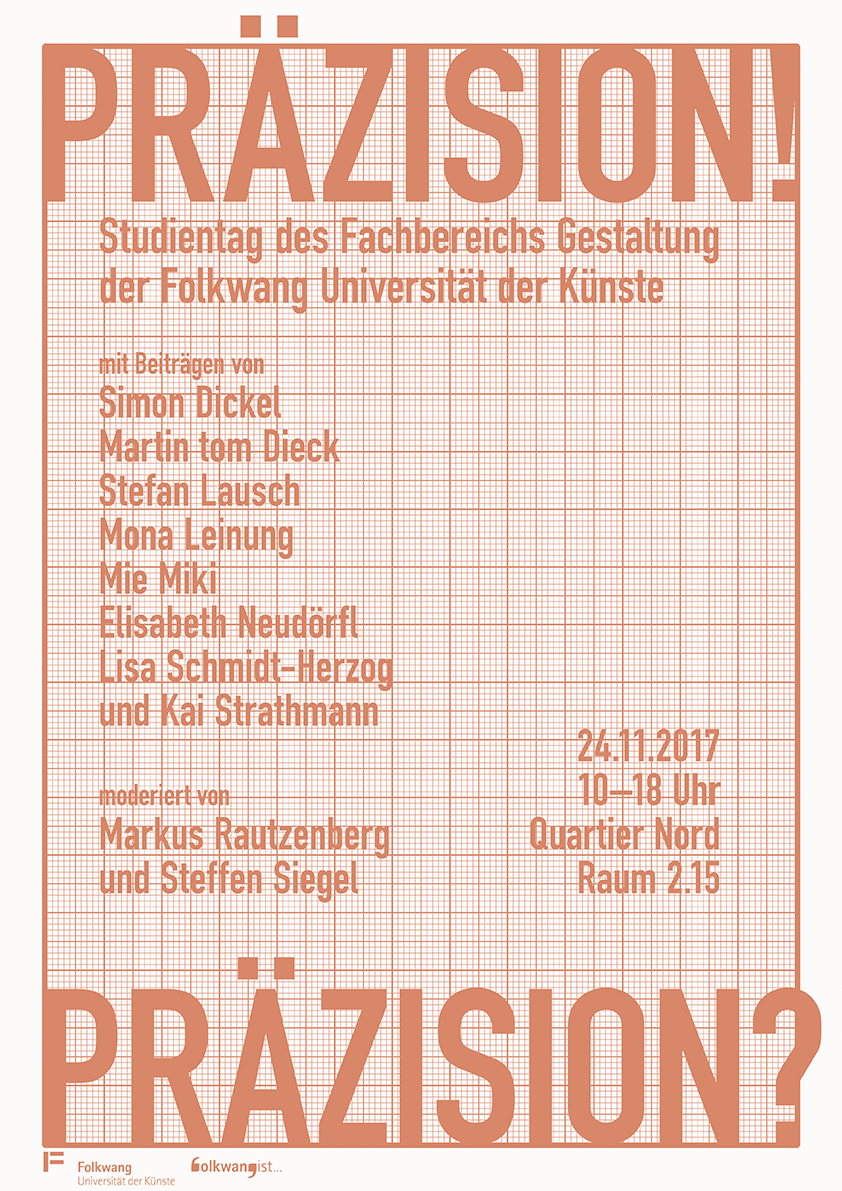 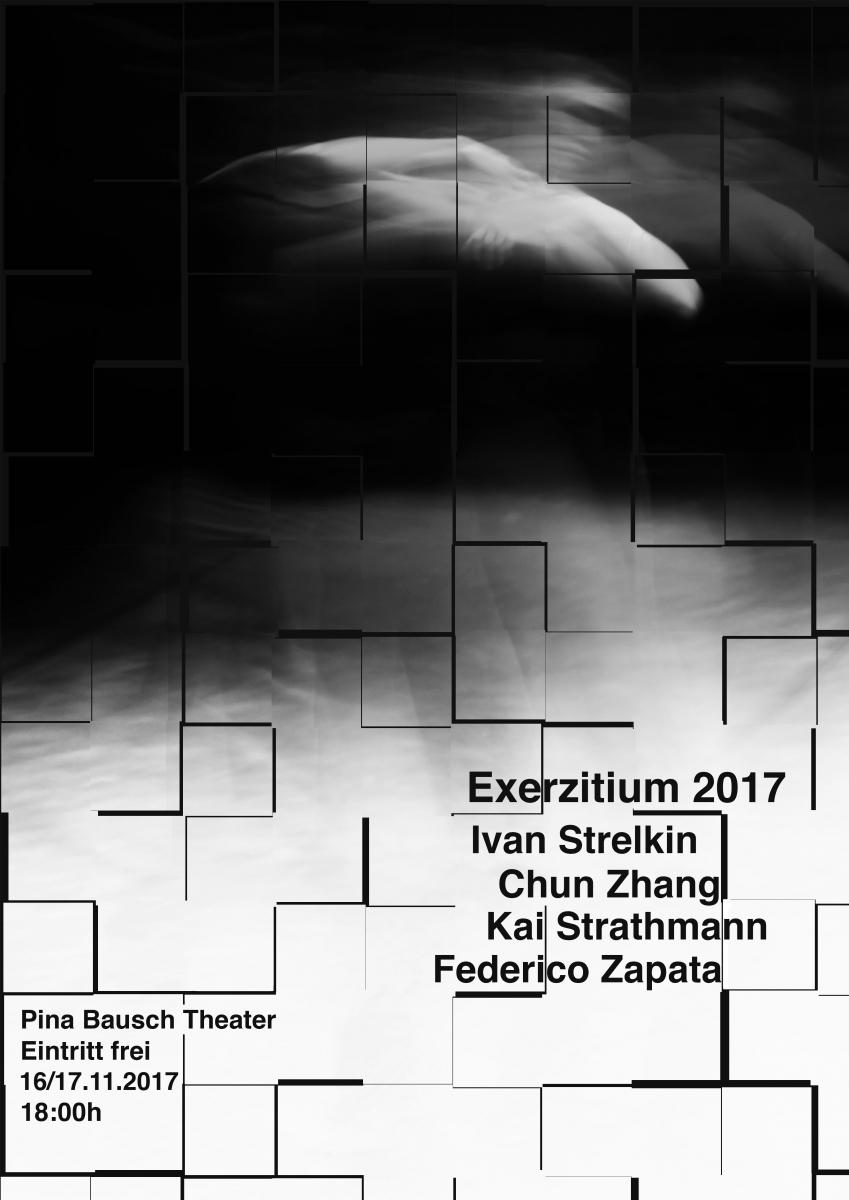 „rasa sayang“ with the 2nd year Bachelor Students „Zeitgenössicher Tanz“ from the Folkwang Universtity of Arts for the Exerzitium 2017. The piece is arround 33min and its created from scratch with chun zhang and all the 22 students. 22 people from 11 different countries and 4 different continents. how can we use the individuality to find a common sense as a group. Based on 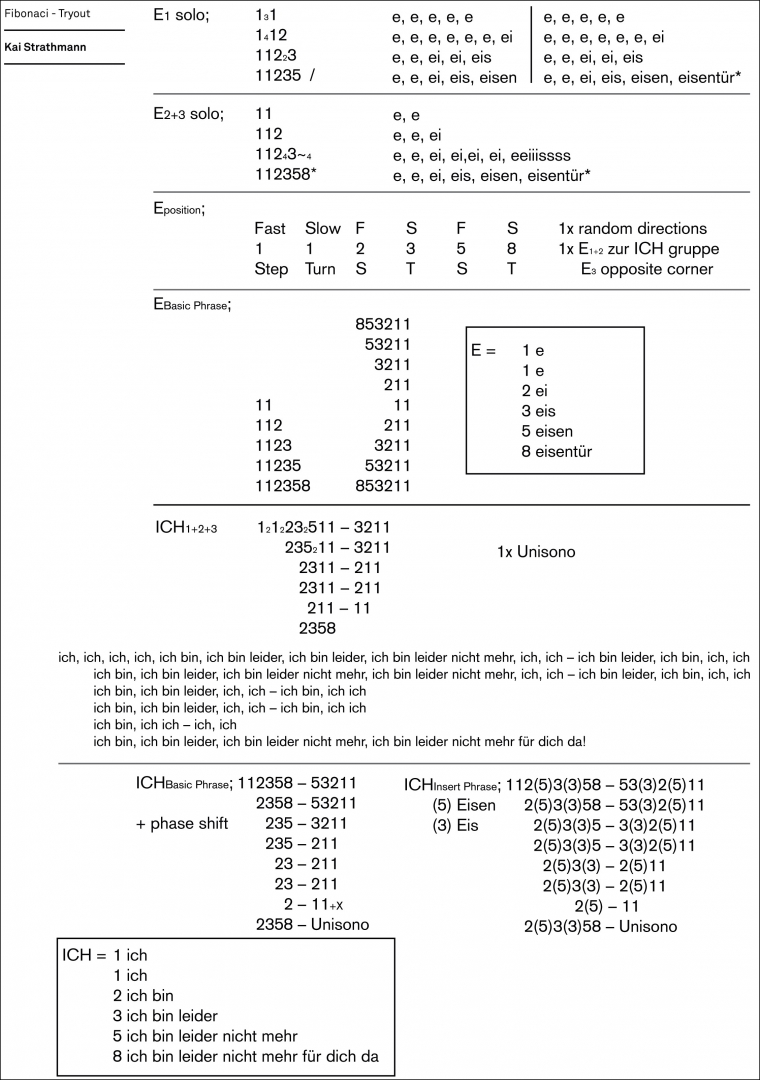 an idea i worked out during our 1. m.a. semester, inspired by henrietta horn who introduced us to the Fibonacci Numbers;1, 1, 2, 3, 5, 8. Its a lil‘ try out, how conceptional choreography can become alive. it was the first time i worked based on a so clear mathematic concept and also got inspired by something so „soulless“. it went into using language as a tool and rhythm. inspired by steve reichs phase_shifting i played arround with some word_phrases all based on the order of the Fibonacci Numbers like you can see above. The „E“ Phrase add the number of characters based on the Fibonacci Number and the „ich“ phrase add words based on the Fibonacci Numbers. Theses Phrases are performed in different order, with different repetitions, with overlapping and phrase_shifting. I added Movement bases on some rules like; first time when gropu „E“ moves, its just steps or turns in the quality fast or slow always alternating. Again bassed on the Numbers of Fibonacci; 1 = one step or one turn 2= two steps or two turns* free. First part is based on that. The 2nd. time gropu „E“ moves they also say their phrase and all three have an accent on the 8 (eisentür). The same time the other group „ich“ goes throug their phrase once unisono and the 2nd. time phase_shift for one beat. When all finished there is 2sec silence and estefania give the cue for the final. we alternate in circle order (not clockwise) and everybody say his phrase based on his position in the circle. 1 estefania = e, 1 marie = ich, 2 patric = ich bin, 3 yurika = eis, 5 kai = eisen and all of us scream loud the number 8. then a fast position change and we wait again for the cue „e“from estefania. we keep the same order but cut down the Fibonacci Number into 1, 1, 2, 3, 5. So all of us say loud the number 5. change again.but just a turn. cut down again 1, 1, 2, 3 all of us say loud 3 and go down any way. cut down 1, 1, 2 all say loud the number 2 and go down in any way. cut last time 1, 1, all say 2 and come up to repeat their original phrase last time and hv a movement accent on the last one either „eisentür“ or „für dich da“. (pass; fib) 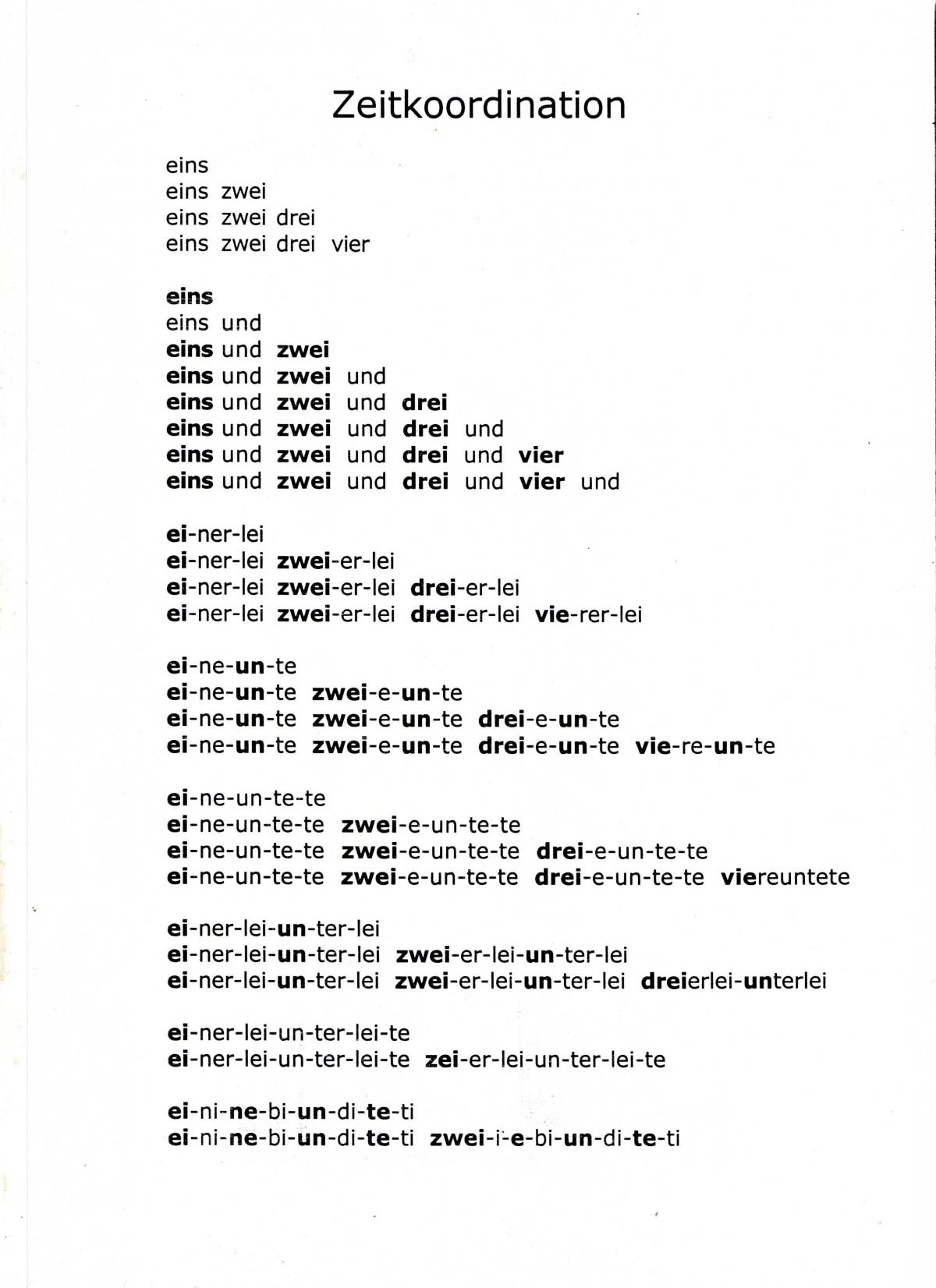 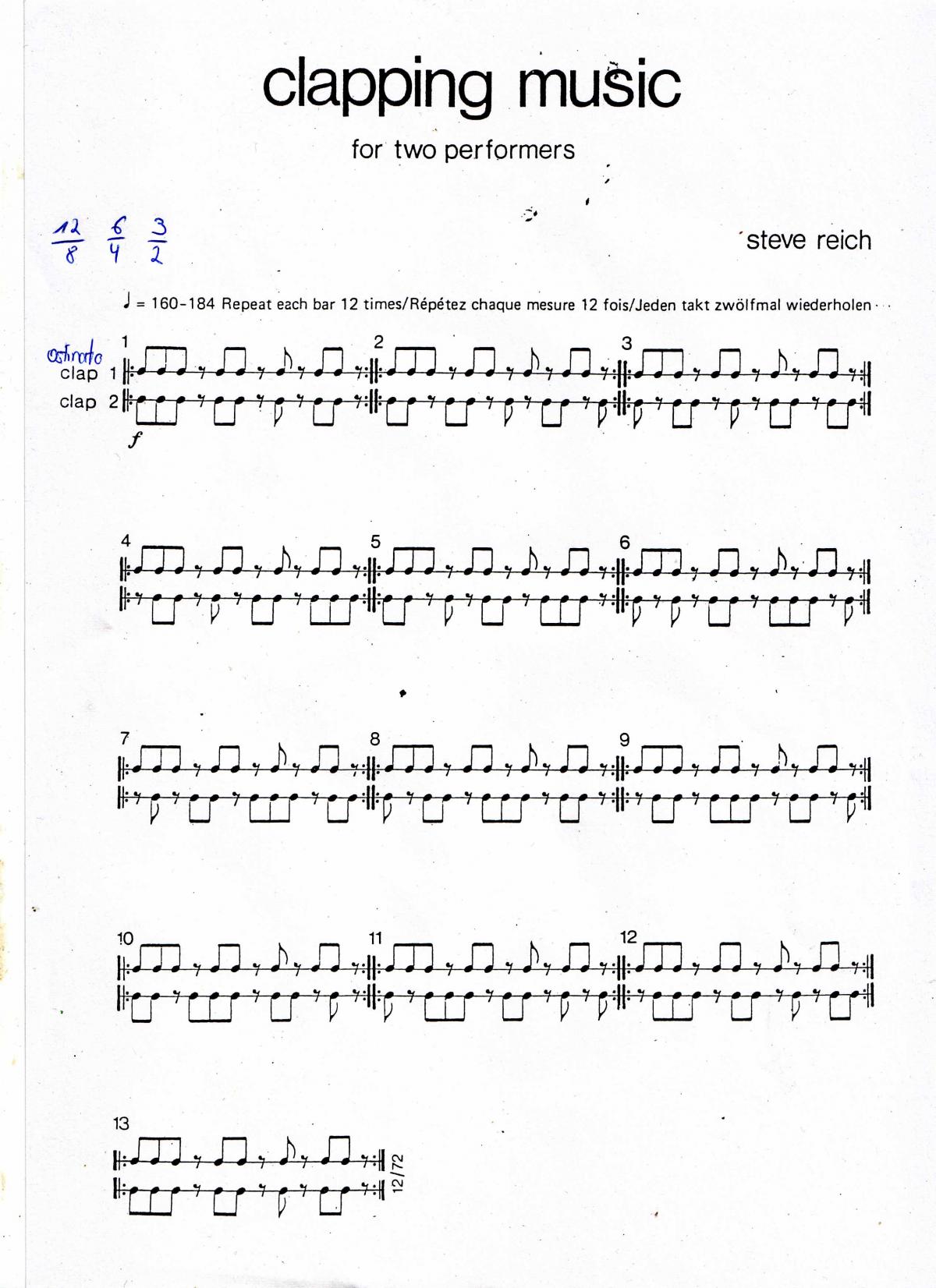 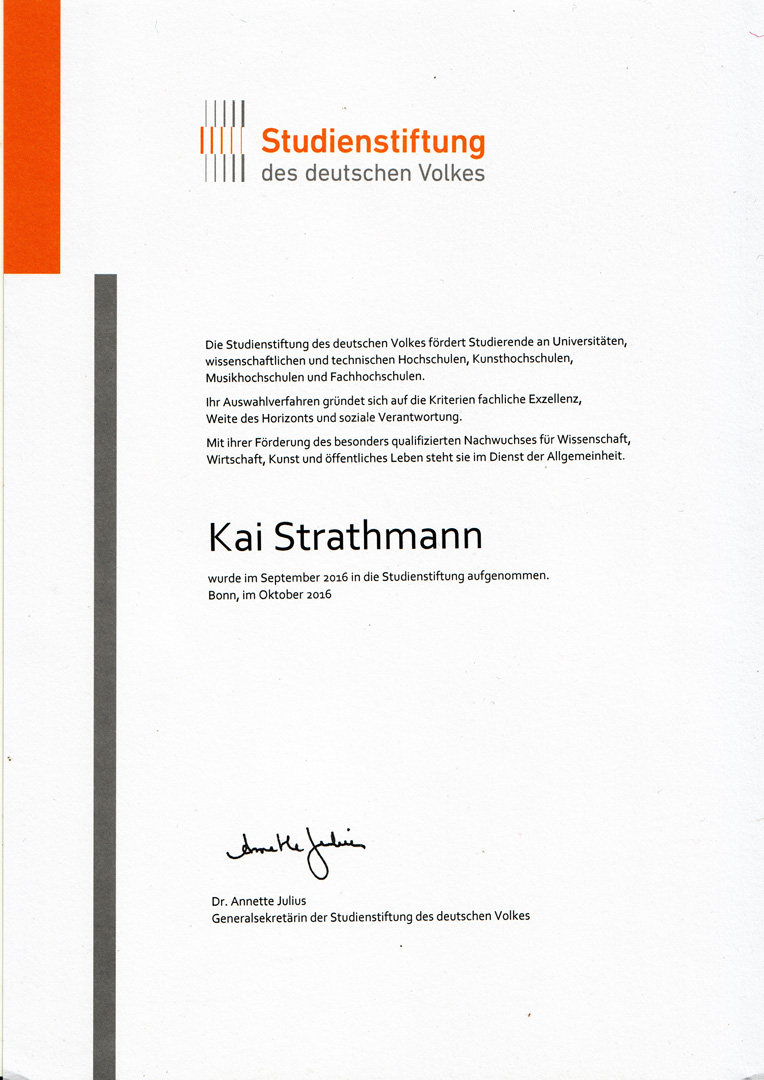 16 ways to manipulate a motif

After more than a week’s intense daily training, today we felt to move forward a little bit, from basic practice to some simple combinations.
The most rewarding moments for me, and also for Kai, was the introduction to the very simple, but fundamental knowledge of body structure. When we tried out these three circles, push, drop and hollow, the whole body structure changed drastically, and we felt more organic applying to the dynamic. Actucally, it’s about the whole mechanism behind any practice or style of Ba Gua Zhang, and how efficient we could use our energy in this specific circumstance.
Another interesting discovery was made when I reminded Kai during our “ultra langsam” body twisting session. When I saw his shoulder started to tense in an unnatural way, I immediately reasoned it to the lack of attention from the legs and feet. After simply pointed out: “let the power come from the feet.”, the change was significant. So it indicated again, that the body is a whole, when some parts have problem, lose its nature and graceful way of moving, it could be an outcome of some more basic problem. And the energy should never be too rush, when it’s not ready yet, to come from earth to the tip of the body. At least in Ba Gua Zhang many Chinese martial arts, the integration of a harmonious body, should never be forgotten along the way.

02.04.2015 Today was our last day of training in the spring holiday. Kai took the position as “teacher” and I was the “student”, since I’d like to test him if he had formed a basic idea of all the practice we had during the past three weeks, as a great way to go over and wrap things up. Despite some insecure moments, he did a good job. I even learnt something from him.

Firstly, we didn’t do the regular “jumping” and “clapping” practice as a crucial warm-up, so when we got into the “plie’” exercise, we both felt dizzy. He told me it was because of the blood pressure was not readz to support this kind of intense “up and down” movement. I now understand the importance of the seemly simple warm-up sequence, is not only for the body, but also for the blood pressure and heart rate.
He also shared, comparing to the first days, even though today it was dizzy, he could control the way body engaging in the “plie’” exercise way much more. It was a precious progress, that I’m safe to say that he could turn the power inward and be peaceful with it.
“beugen” and “versuchen”, are the two german words I learnt during the practice,when I corrected a posture of him (see pic in the mid): “bend your right knee”; and also when I suggested to “try to do…”, he cleared up the difference between “versuchen” and “probieren”. That were extra credits for him as the teacher.

Now the holiday is almost over, but it seems like our practice of Ba Gua Zhang is just started. Since the first time I show him the beautiful video of a very advanced Repertoire, till we decided to use the time of the holiday to get into it intensively, we feel the great vibe and energy flow all day long, everytime we ride back from the forest. So now, we are looking forward to the great change it might bring to our dance training and choreographing.

Today is our first training after the semester starts. The whole week we were so busy fitting ourselves to the “new” daily routines, so there was no chance to set aside sometime for practice.

But today, despite the beautiful weather, we directly felt the joy, without the boundary of studios; 90mins; 8 counts; just pure joy, the music is the bird singing, the light is the sunshine, and the rhythm is our heart beat.

Kai took the position as “teacher” for the warm up and basic training part again. I like more and more when I give him the position of leading the training, and he also uses it innovatively, especailly today, he even “invented” two movements as a part of training, which I would like to mark down so much.

First is he applied the “ultra langsam” method to the “peeling palm” on the basic standing position. Actually, in the “turning waist” exercise, we already use the “peeling palm” in a more complicated way, with more waist twisting and direction changing. But when he goes back to the basic way of doing “peeling palm”, without any twisting, but with extra slow motion, he actually tells me, what he needs, as a learner, to prepare more for the complicated movement. I will use this method, to all the other training of basic palm exercise.

The second one is when we do the “peeling palm” with steps. Usually we just train steping forward. Today he came up with an idea of steping backward, but the palm is still as powerful and functional as it is. Through that, I realised that actually ba gua zhang is also arts, if it’s arts, then it’s meant to be creative, so it should of course be able to innovated and developed. The first thing is, to be more clear about the principle and essence, then create upon them. So we cleared up some details around the steping backward idea, such as how to apply the circles before every step; always move from your legs, and grab the energy from the earth… then it worked perfectly. I think in the future, when we are more clear and confident about the principles, we will create our own repertoire.

Kai also shared, the second step after the major “attack” step, is so important, that it could bring your center back to control, to always ready to project power, then you always have enough space to adjust back to center. His practiced “jeet kune do” when he’s a teenager, he didn’t realised the importance of this little second step following, until today, he could connect the weight shift and centering together.

Here I share a video I use for our practice, since 6min 52sec, the teacher started to explain the basic palm forms and later on palm techniques step by step. Very good material, but pity it’s just in Chinese. Actually the thing we’re doing, is using other sources, exchanging/creating also our own path. That’s how we grow and free ourselves.